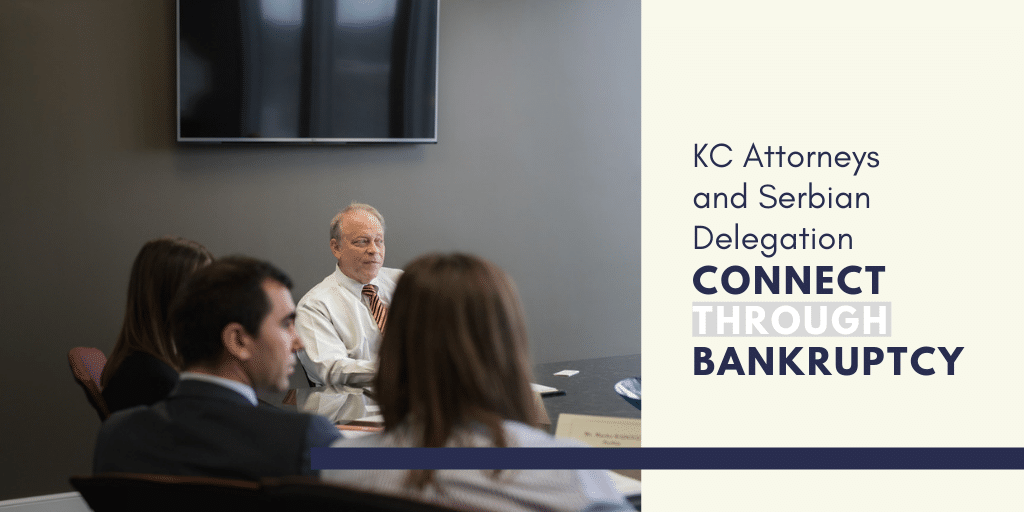 Kansas City lawyers at The Sader Law Firm and the Serbian Ministry of the Economy met last month to discuss a common interest. Both parties have a stake in the same wager: personal bankruptcy can incite economic progress while also contributing significantly to the financial success of individual citizens and businesses.

The Serbian federal government sent a delegation to the United States this past September through the hospitality of the International Visitor’s Leadership Program, the educational arm of the Department of State. Locally, they were hosted by the non-profit Global Ties KC, which brings over 300 delegates to the Kansas City area annually on behalf of the Department of State. The delegates visited New York, Washington D.C., Reno, Nevada, and Kansas City to meet with local legal experts as well as government officials in each city. The aim of these visits included an overview of United States federal bankruptcy policy, as well as its materialization through local practices. By examining both the design and the implementation of the United States’ bankruptcy practices, the delegates hoped to gain a perspective that could be helpful in shaping Serbia’s future bankruptcy-related legislation.

Meanwhile, Kansas City lawyer Neil Sader and his firm partner Brad McCormack are working to change the way their own locale thinks about bankruptcy. Sader, whose personal and professional interests include federal politics and concern the future of the Kansas City community, believes bankruptcy makes an important difference in the economy. He says this is because it often provides the opportunity some people desperately need to recommence their lives –and once again contribute to the system.

During the September 21st meeting between the delegates and The Sader Law Firm, Serbian Assistant Minister of Economy Marko Radovic expressed that Serbia’s current bankruptcy policies (which at present only extend to corporations) are dragging down communities because individuals with overwhelming debts don’t have a formal process to recover from them. Concurrently, creditors in Serbia who need to secure money they are owed lack a structured means to do so. The Serbian federal government feels the economic burden of an entire country without a formal process for settling (or forgiving) debts.

An unexpected area of discourse included how student loans and student loan forgiveness—a heated topic in the US news recently— factor into both countries’ financial circumstances.

Radovic felt the delegation gained valuable insight through the visit to the United States. “We were able to feel the spirit of functioning of the US bankruptcy system, especially in the field of small and medium-sized enterprises,” he said. Through the visit to The Sader Law Firm, he noted that he and his team felt they were able to encounter “the essence of US bankruptcy law”.

Since the panel, both parties connected on LinkedIn and have stayed in touch since then. Radovic also checked in a few days later during a visit to Sader’s alma mater, Columbia University.

“It was truly delightful,” Sader said of the meeting. “Having the opportunity to explain the history of bankruptcy in this country, and the financial problems we have now — and then listening to what has taken place in their country over the years—it was fascinating to look at the differences between the systems.”